Posted on January 9, 2016 by momsmeanderings 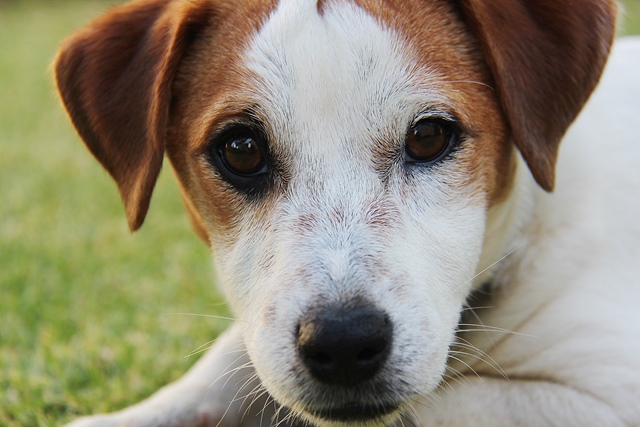 In his short little life, he crept into everyone’s hearts.  We will all miss him so very much.  I missed the sound of him running down the passage this morning, for a quick lick on my hand, and his rub around his ears before dashing off outside, as he did every day.  His bed is empty except for his favourite Duck which he used as a pillow.   Some toys are still scattered on the floor.  His doggie bowls are empty.

I was in the throws of putting together an update of his ‘cleansing-of-the-stomach’ operation with pics of the grandchildren and hubby gathering macadamia nut shells .. a mammoth task as I had used them as mulch almost everywhere!!!!! … and anything else that would harm his little tummy!!   My blog post was also to have a pic of his 15cm long cut along his soft spotty tummy.  This isn’t relevant anymore although the only thing I can say is that the operation went well.   That was not the cause

As I said he was doing so well.   When he was home played boisterously, discovering his toys again, pulling out his favourites.  ‘Flavours of the month’ .. his Santa and his new squeaky balls.   He tired easily, which was understandable after a major op.

Hubby and I went out that evening to celebrate our son in law’s birthday, leaving Maxie indoors for fear of rain (which didn’t happen of course).  When we got home, it was still so hot at 10pm (31.5 C)!   We spent a long time playing with him on the lawn.  Me, sitting and being licked all over while he bounded about and hubby playing fetch with his Santa.  He was so good at ‘fetch’.  Always brought the toy back for more .. and more.

Yesterday morning he was full of beans.  Playing ‘fetch’ with hubby up and down the passage, pulling his cushion around the garden, putting his nose into his toy basket to see what next to play with.   Even on his own, he played with his small balls.  He would drop it from his mouth so it bounced .. he would catch it.  Push it with his nose like a soccer ball then pick it up.   Another favourite game was to push the ball under a chair or low table and look at you with big brown eyes until you retrieved it.

Later in the morning and within an hour or so, he was so weak he couldn’t stand on his own.   Then the seizures began.  They started off short and grew progressively stronger and longer.   Raced him to the Vet.  By that time he was in a terrible state.  He had swallowed his tongue, he foamed at the mouth, his tongue turned blue, his little body shook violently 😦 😦 😦   All this happened within an hour.   We felt so helpless.  Simoné, the Vet, was wonderful.  At first she thought he’d been poisoned but the symptoms (mainly the seizures) showed signs that it was a liver shunt.  (Never heard of it, but I’m not in the medical field at all) In consultation with a specialist over the phone it was decided Max needed a scan to ascertain the type of shunt and intensity.  But before a scan could be done she needed to do an acid liver test which requires an overnight starvation period.  Then food is given .. then another test done.

Liver shunt :  The main blood vessel runs through the liver, which in turn cleanses the blood of toxins, but in the case of a shunt, the vessel runs outside the liver, missing the cleansing process.  It is usually genetic (so he has always had it) but she said signs of symptoms only show in puppies at this age (around 9 months).  It is treatable with a special low protein diet.

What concerned Simoné was his recovery after an anaesthetic.  He took two days to fully recover which shouldn’t happen.  She saw on his records that the same happened after his neutering.   At this point, I can’t remember what she said about that.

Simoné was very very  fond of Max.  And he of her.   All the vets at the surgery were fond him, including the receptionists.  Max was very special.

All this took place around midday yesterday.  She kept him heavily sedated throughout the afternoon and the plan was that she would take him home with her in order to monitor him all through the night and do the acid test first thing in the morning.   Well, that didn’t happen.

Both hubby and I waited impatiently for her phone call in the evening with an update.  It wasn’t good.  Every time he came out of his sedation he went into a seizure.  She kept having to administer sedatives, which I’m sure isn’t a good thing.    It was time to say goodbye 😦

Too many severe seizures caused neurological damage.   We saw it in his eyes.

We held him close while she administered the injection, she in tears too.

Our little Maxie crept into everyone’s hearts.  Those who got cuddles and  those whose paths he crossed, whether in the flesh or on Facebook or my blog post.

He was very special.  A unique puppy with one black eye with black eyelashes and one white eye with white eyelashes, his slight under bite, his black and white toenails.  A favourite with all at puppy training.  A playmate for Hardy and Lily.  A cuddlesome, lovable, mischievous, boisterous, feisty cutie pie.

Rest in peace my baby boy.   My Maxie-poo.  We will always love and miss you so very much .. all of us

Play well in doggie heaven with Robbie and Jackie 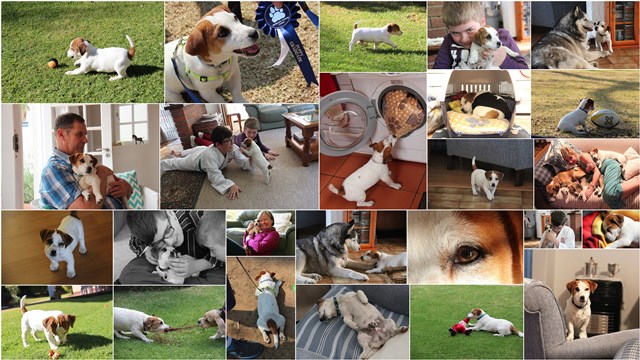 Wife ... mom ... granny .. in a nutshell ! Never a dull moment !
View all posts by momsmeanderings →
This entry was posted in Jack Russell, Max, pets, puppies. Bookmark the permalink.