Yay … the sun is shining!

We woke up this morning to lovely sunshine …. 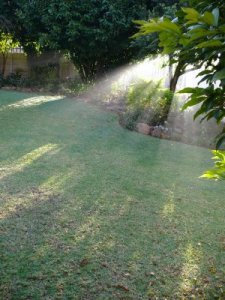 … after a couple of days of unseasonal rain … brr … chilly and wet!!! When it’s not expected there were many of us collecting littlies from school without umbrellas or rain jackets. Gentle but soaking rain and I spotted lots of littlies standing in the cold and rain waiting to be picked up. Lots more sick kiddies and mommies/grannies/grandpas/care-givers in a few days time, I’m sure!!

We all got wise by the second day and were prepared with suitable cover-ups from this dripping moisture from the sky!! Lovely for the gardens but not for us who live up on the Highveld who are used to dry, sunshiny but chilly days and crisp and cold/freezing nights!

I’ve had a busy week and not taken many photos so my Weekly Winners tomorrow will be mainly from our wonderful weekend in the Cape.

But … we did have Mr T for dinner who hinted that he would love a roast lamb with roast potatoes and veggies and I managed to sneek a photo of him woofing down his favourite pud/dessert …. which of course he hinted at/asked for/begged to have ….

….. chocolate eclairs which are now becoming a must-for-me-to-make for any South American who comes to dinner!!! 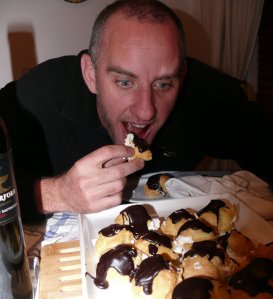 Left-overs .. and yes there were, but only a few … were equally woofed-down-with-gusto by the other youngest males in the family … Bradley was so quick with his, so no photo, but managed to capture Connor in his male version of Red Riding Hood, with chocolate smudged face ..

Surprise !! I was presented with this lovely jewellery box the other day by Browns Jewellers in Cresta. We have introduced their jewellery to our South American friends who have all bought a few beautiful pieces to take back home and this was a ‘thank you’ for bringing them business. Now, isn’t that fantastic! Good marketing … as Elaine pipped up … now that she is in the marketing world and thinks in marketing terms (!) … AND has been told she will be offered a permanent post ! Yay !!!! What a relief!! She still has to go for the meeting to find out all the details.

Also in my week, I have had two sessions at a physio for my neck. Have been to a physio only once … and that was many years ago for migraines and headaches, which I used to suffer from. It didn’t really work and eventually I started yoga to see if that would help. Yes, it did .. and have been to yoga ever since!
My neck story is not serious as I have never had any kind of injury or broken bone but besides the normal degeneration of the joints – which I am told is normal at my age (horrors to be always told that when I don’t feel as old as I am!!!) …. so besides all that, my neck clicks. It’s not the normal ‘crunching’ that only you can hear in your head, it’s a loud click! Have had it for over a year now and decided to go to the doc to see if my head was going to fall off!!
Anyway, the first step is physio who, after only two sessions, is very pleased with my progress already. I may just need two more sessions as I have been a good girl/granny doing my exercises and following her instructions as well -although she said sitting at the laptop is NOT GOOD! The angle is wrong – the screen is too low and needs to be raised. She suggested popping a telephone book under the laptop … mmm … that doesn’t work ‘cos then you sit with your arms up in the air like a squirrel!!!
I just have to not spend too much time doing blogs etc …. but what is good is that I do yoga which has strengthened my neck to such an extent that this problem that I have doesn’t give me pain .. just clicks … with no pain. That’s a good thing!
Soooo … I need to continue yoga .. forever .. and I want to start going to pilates again, which is equally as good.
I had to teach a yoga class yesterday! And it went well … and they enjoyed it!! The instructor for the usual aerobic gym I attend every Friday, is away on a months holiday and she asked me to do two yoga classes with the other classes being taken by other fellow ‘gymers’. Really nervous about taking the class, so I had my notes next to me … still got a little flustered and ‘lost’ in the middle of the class but they didn’t even notice!!!!
I had quite a few of the ladies come to me after the class to say how much they enjoyed it!! They loved the incense and the soft ‘pretty’ music. They battled more than I thought they would, especially with the one set of ‘asanas’ called ‘sun salutation’. I thought that would be the easy one but I realised how flexible I was compared to them. I get lost in the normal aerobic class … eye-hand-feet-body co-ordination at speed is totally different to the slow movements and holding of positions in yoga which is far more controlled with regular breathing, intense and calming.
I also realised I need to keep it even more simpler and slower. Wish I could explain each asana with the science behind each one as it would mean more to them, as it does to me when I am in a yoga class. My memory is such that I can never remember, in detail, what it all does for each specific part of the body. But I am not a teacher and I haven’t had the training …
Sooo … in two weeks time I shall be doing another class .. with about 18 to 20 pairs of eyes watching my every move!!! (it’s a big class!)

4 Responses to Yay … the sun is shining!